skip to main | skip to sidebar

Ingenuity Industries, Inc. invites you to drop by and visit us in booth 2159, at the upcoming CTIA show in Las Vegas, Nevada this March 23-25, 2010. We will be doing live demonstrations of our latest Telecom Lifter, the TL-1850. Its new aluminum lightweight construction and added features have created a much more adaptable and diverse lifting system. Our demonstrations will include lifting an Ericsson 2106 RBS cabinet provided by Tempest Telecom out of Santa Barbara, California.

We hope to capture your imagination and show you this great new tool and service for your arsenal, when it comes to equipment upgrades with difficult accessibility (rooftop, in a lattice tower, in a shelter, snow).

A portion of our booth will be dedicated to showing the cost saving and ease of use benefits of our two-hole lug washer. Bond Washer was recently recognized by the Lightning Protection and Grounding Institute as a wonderful cost cutting insurance hardware item. For an average of thirty-five dollars per cell site, these washers will serve to give you a more dependable and effective bond to ground. The gas tight seal forms over the entire surface of each two-hole lug and ensures an even clamping force like no other washer.

We have received rave reviews from field technicians and tower climbers to contractors that simply can't afford quality control problems. Tower climbers love them because they are easier to hold on to, with the added benefit of only half the parts to install. When you are fifty feet to a thousand feet in the air, it can make a tremendous difference.

We will also be handing out a special printing of our Bond Washer product, these will make a very useful and handy key chain item. They will have contact info for reordering on the spot, just clip it to your keys or climbing harness and you are set. Remember Bond Washer: The tower climber's choice - landing ground leads never got easier!

Look forward to seeing some of you at the CTIA show!

The Federal Environmental Protection Agency is looking at ways that the EPA can encourage and reward corporate America to reduce carbon emissions in all operations. The Kyoto Protocol looks to reduce USA green house gases by 7% (http://unfccc.int/kyoto_protocol/items/2830.php). Just recently, Lisa Jackson (administrator for the EPA) initiated a federal effort to reduce corporate green house gases. Here in California, a crane accounts for 10,744 times more carbon emissions than does the Telecom Lifters’™ method for each rooftop cell site modification! In addition to the incredibly lower carbon emissions, the fees charged by Telecom Lifters™ always are lower than those charged by the crane companies. Any contractor advertising such operational advantages to the providers will excite the providers. Public relations managers will be able to extol their protection of the environment! CFOs will love the reductions in operational expenses that Telecom Lifters™ brings. Safety Managers will appreciate the innate safety and stability of the equipment and procedures. The use of Telecom Lifters™ instead of a crane for any rooftop project always will cost the contractor less, enabling him to bid and fulfill a lower-cost contract. With Telecom Lifters™ on the rooftop instead of a crane in the street, the community, citizens, and businesses will greatly appreciate the fact that there will be no disruption of local business, no blocked traffic, and especially there will be no imminent danger from having a huge crane, and its deadly risk, teetering over them!

Telecom Lifters™ can be proud of its efficient, safe, and well-designed system; it is changing the way contractors and providers conduct business in the field. No longer is it "business as usual".

1. A crane with engine running for 2-hours at jobsite

4. Telecom Lifters™ takes about 2-minutes to lift an RBS, and 2-minutes to lower it, but call total run-time = 5-minutes per project

5. The emission coefficient relating to the pounds of CO2 emitted per unit volume or mass for diesel consumed can be found at http://www.eia.doe.gov/oiaf/1605/coefficients.html

7. Referring to: tonto.eia.doe.gov/ftproot/environment/e-supdoc.pdf from the D.O.E., the US average is 1.638 pounds of CO2 emitted per 1-kwh of electricity generated

8. In California, electricity generation accounts for 0.305 pounds of CO2 per one kilowatt-hour.

11. Using a crane to modify just 1000 cellular tower sites in the San Francisco Bay Area accounts for 10.7 million times more carbon emissions than using the Telecom Lifters™ system to do the same work!

Posted by Tim Springsteen at 11:37 AM No comments:

Telecom News: US telcos ready to spend, suppliers to benefit

How clean is that? 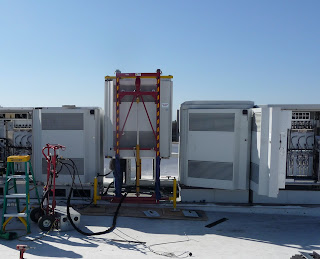 Rooftop lift of 5 cabinets for roof repair 4 story auditorium.
This lift would have required a 125 ton crane, not anymore!

Press Release
NEW PRODUCT AND SERVICE SAVES MILLIONS OF DOLLARS FOR WIRELESS PROVIDERS INSTALLING BATTERY BACKUP EQUIPMENT FOR EXISTING RADIO BASE STATIONS!
Ingenuity Industries, Inc. ™ is a research and development company in Northern California, which presently is working in the cell tower maintenance industry. They own a company called Telecom Lifters™, which has invented a unique lifting machine which can attach to and lift a 1400 pound Ericsson radio base station (RBS) high enough to insert a battery backup box (BBU) underneath. This new approach completely eliminates the need for a boomtruck, crane or helicopter in order to lift the RBS in maintenance and upgrade situations. A three-man crew can carry the patent-pending machine, called the TL-1800, to the RBS, attach it to the RBS in about 20 minutes, and lift the RBS to a height up to 40 inches in about 2 minutes. At this point, the BBU safely can be mounted under the RBS, and then the RBS can be lowered onto the BBU in 2 minutes. The time for attaching, lifting, lowering, and detaching is less than it would take to file for permits for a crane lift! It is also possible to perform some of the lifts live without disrupting cellular service!
All the undesirable factors associated with equipment upgrades and modifications at cell sites; such as, crane costs, permit fees, street blockages, fuel consumption, high carbon footprint, and instability of the cranes are drastically reduced or eliminated entirely when using Telecom Lifter’s™ TL-1800! The TL-1800 is powered by 115VAC, and uses about the same amount of power as would be used by a household microwave oven during the 4 minutes of lifting and lowering of the RBS. Check out more pictures and information on jobs they have done at http://www.telecomlifters.com/.
Ingenuity Industries, Inc. ™ also has a product called the Bond Washer™. This is a two-holed flat washer used on ground bar lug applications. This product is commonly used on cell tower ground bars, which saves the contractor time, money, and frustration! The Bond Washer™ provides a better coverage of two hole ground lugs than washers that are too small or to large and it provides a much cleaner, space-saving appearance. No more grinding washers or trying to fit the wrong size single-hole washer on a ground bar. Worse yet no flat washers at all. Go to http://www.bondwasher.com/ for ordering information or call 1-800-576-7260 for services and products at Ingenuity Industries, Inc. ™
We currently have active MSA agreements and are fully insured.
We are seeking more Contract Agreements for Vendor Status at this time.